For my second entry into Spotlight's competition, I decided to have a go at creating donuts: 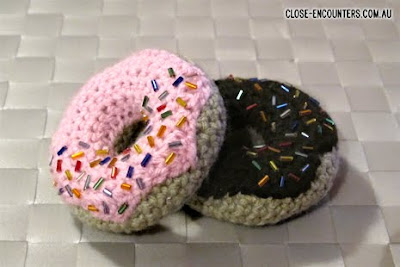 Still using the same yarn (100% acrylic and 8ply), I made the donuts with two different coloured icings - Pink (my absolute favorite donut icing on this plan) and chocolate.

I added sprinkles by sewing on long beads with cotton that was the same colour as the icing. I'm really happy with how the sprinkles turned out, I would have thought the thread would have been rather visible, but no, it blended into the icing just perfectly!

If I was to attempt this project again, I would take the time to sew on the icing using only the back loop of each stitch. That way the icing would have a raised appearance and look more three dimensional.